When the Cat’s Away 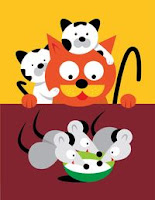 (This is an original New York City Moms blog posted on March 15th, 2010.)
You know the expression “when the cat’s away, the mice will play?”  Well, in my house this week, it’s been the reverse, as the mice are killing each other.  My husband has just taken a new job and had a week between the old and the new.  We decided it was a good time for him to spend some quality with his family in England.  The children did not want to go for such a long time, and I thought, how bad could it be watching the two critters for a week?  For the most part, I take care of the children on my own during the week, anyway, so how much harder could it be?  Besides, distance makes the heart grows fonder and after eight years of marriage, a break could do us both some good.  It has taken me the better part of the last seven days to realize just how nice it is having a partner in crime, for so many reasons.

It‘s just that much easier when you have two people to handle two children, one for each.  At bedtime, he puts my son to bed, and I put my daughter to bed.  He handles bath time and brushes teeth while I organize their things for the next day.  When I’m settled on the sofa either watching TV or reading a book after they are supposedly in bed, and one comes downstairs to either delay the situation or to ask for some water, my husband always jumps up and is at their beck and call.  It’s also easier to give one more attention when your focus is solely on that one child.  The challenge of putting the kids down after I’ve already been with them most the day is also that my patience is hardly existent.  After he comes home from a long day at work, he is genuinely excited to see them.  He’s got fresh energy whereas I’m just spent.  And now…after eight days of taking care of the two alone, with no help at all, I’m probably not that much fun.


My 5 year-old son certainly knows how to rub my nearly 7 year-old daughter the wrong way.  As soon as she comes home from school, he starts with her.  He could have been lovely and well-behaved the whole afternoon prior to her return, but as soon as she comes home, it all changes.  He’s a tough cookie, anyway, and I’ve had to start lying down consequences for his behavior.  I know in my heart that the two will be very close one day when they’re young adults venturing off into the world, if not before.  I don’t plan to have any more children, so they will only have each other.  Right now, though, they are two ends of a bookshelf that don’t quite fit.  It’s much easier when my husband is home to serve as the referee.  His voice is somehow a bit firmer, and they tend to listen to him quicker than they will to me…at the moment, anyway, because we’re spending more time than usual together.

My son is also a daddy’s boy.  I had no idea how much the separation would impact him.  But it has.  His behavior at home hasn’t been anything worth writing home about since my husband left, and I got the inevitable email from his teacher later in the week that things weren’t going too well at school.  Things improved last night after he was finally able to speak to his daddy by phone and Skype.  He hadn’t been able to prior to yesterday for some unknown reason.  He missed him so much that I think he couldn’t deal with any interaction for several days.  It wasn’t until immediately after that conversation that I realized how much he missed his father.  His entire persona changed and the whole world seemed to open up.  He is already counting down the minutes until the big trip to the airport.For me, personally, I haven’t been able to go out this week at night, and I haven’t been able to get a lot of my own work done.  I’m always catering to their needs, which is to be expected, of course, but when you have two people tackling the task, it is that much easier.Oh, and dare I mention my technical challenges?  The morning after we dropped my husband at the airport, I woke up to a broken keyboard on my laptop.  Apparently, someone has spilt something on it, but I can’t for the life of me think of when that happened.  He has asked that I await his return to fix it. Later that day, the TV seemed to stop working.  I got it to start back up by talking to my husband from the UK as he managed to walk me through me how to get it back on.  The next day, I couldn’t start the car at the ice rink and I needed to pick up my daughter at Sunday School in less than 5 minutes.  Out of desperation, and because I didn’t know what else to do, I asked a total stranger in the car next to me to please take us to where she was.  The woman had a little girl with her, and she looked perfectly safe.  Naturally, she could see how upset I was and drove us where we needed to go.  When I got back to my car, it started right away.  There was a problem with the car alarm and I guess it reset itself after I’d gone.  Nonetheless, it was very frustrating.I will say that this probably does mean that I should pay more attention to the not minor, but rather major, details that my husband tends to.  I have only recently learned to download photos and music.  I used to rely on him completely for these small, but important functions.  I now pay more attention to what he’s doing, and I certainly will when he gets back.Marriage isn’t a piece of cake.  I complain often about the mess he leaves behind, about having to compromise, about sometimes not being able to do some things I want to do.  But I think I will complain less when he gets back.  It’s a partnership and we’ve developed a life that accommodates spending time together that works, as well as spending time apart.  We operate better as a family because we are a family, and we’re both an integral part of our kids’ lives.There were a few nights this week that my daughter sobbed in bed for her daddy.  She was inconsolable.  Every night after I put her to bed, he comes in and reads her a book or she reads one to him.  Without the regular routine, she has been just as lost as my son.He’s coming back tomorrow.  I’m getting a sitter for a few hours later to give myself some quality “
me” time.  I’m not sure how I’m going to use this time.  I may go to the movies, I may have sushi, I may read, I may go shopping.  Whatever I do, it will be my time to “refuel,” just as my husband’s visit will be for all of us. The mice won’t stop fighting when he gets back, but they’ll certainly appreciate him more.  So will I.  I can’t wait until he walks through the door.