Posted by The Culture Mom 1 Comment
You know it’s a good sign when during a show, your child turns to you and says, “I don’t want this to ever end.” That’s what my daughter said to me during the Gazillion Bubble Show, which we ventured into the city to see this afternoon as a spring break treat.  I had heard about this off-Broadway show for a long time but didn’t know what to expect.  The theater is over at the New World Theater on 50th Street and 8th Avenue. 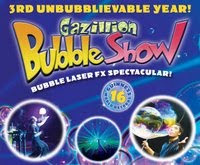 The show’s host is Guinness World Record Holders Fan, Ana Yang.  She explains in broken, but very legible English, that she was born in Vietnam and was trained by her husband in bubble artistry.  The show is interactive and visually stunning, complete with light effects, lasers, music and smoke. Yang uses young members of the audience all throughout her show, and they were all tickled to be taking part in her bubble mastery. At one point, she enclosed four of them inside a large bubble.
Both my kids were jumping out of their seats trying to pop the bubbles of all sizes flying over their heads.  They were both absorbed by the show’s colored lights, music and bubbles and Yang has a very good way of keeping their attention the whole way through.  There were a lot of videos shown during the performance, which there could have been less of, but it didn’t take away from the performance and the finale was pretty brilliant.  The show lasted about 90 minutes.