Highlights of our trip to L.A. and, oh, the rain

I never thought it would rain so much during our trip to Los Angeles. Even our friends who live there couldn’t believe the amount of rain that hit last week. It was a sog fest. Nonetheless, we all had a great time, out of our usual routine and environment. I had been to L.A. loads of times for work and to visit my friend and sister back in the days of no kids, so I know the city pretty well.

We stayed at a superb hotel called the Erwin in Venice Beach. Overlooking the boardwalk and sea, it’s a retro hotel that’s part art gallery, part beach house. It was across the street from good restaurants. Our suite had a balcony (which was unfortunately too wet while we were there to enjoy), cozy furniture, a fireplace and a kitchen with dining area all decked out in retro, modern style. There’s a rooftop lounge with dazzling views and a reasonably priced restaurant called Hash with free drinks weekdays from 5-6pm. The kids were very comfy on their pull-out sofa and I would move in tomorrow if I could…..

Due to the rain, our usual sight-seeing was limited but we did get to the Santa Monica Pier.

This is a very affordable, fun amusement park has a Coney Island, old-timey feel. It offers the typical 3-for-a-dollar booths, cotton candy, funnel cakes, and all the old standards of an amusement park. It’s right on the ocean, and the 3rd Street Promenade three blocks away makes for a fun outdoor shopping and eating area. Out kids loved it. It would have been nice if the rides had been open but we enjoyed our funnel cake so much that nobody minded.

My oldest friend lives in L.A. and she suggested we hit the Griffeth Park Observatory. It was a great idea, especially considering the sog fest. Griffeth Park is the largest city park in the USA. On the way to the observatory, we had amazing views of the city (again, a bit foggy) but we could see the Hollywood sign. Newly renovated in the last few years, the observatory is beautiful. It’s chock full with exhibits about the moon and space, stars, natural phenomenons. The planetarium only cost $7 for adults, $5 for children ages 5-12. We saw the program Water Is Life which takes visitors on a journey through the solar system in search of water. It’s ideal for the family as even our youngest sat through its entirety which is a rare occasion.

We had lunch at Louise’s Trattoria on 4500 Los Feliz Boulevard which was yummy for all of us. Good NY pizza for the kids, salad for me. The nice owner put my daughter to work sealing his pizza boxes which kept her happy and busy while we waited for the pizza. The meal cost $25 for all of us, with 4 drinks included. For dinner, we headed to Hama Sushi at 213 Windward Avenue in Venice Beach. We wanted to go somewhere we could walk from our hotel. My son had his best meal yet: edamame, chicken teriyaki, rice and dumplings. Miss Fussy, on the other hand, made the most adamant face known to man kind, and held out until she got an order of chicken nuggets. It’s crazy how kids turn out so differently. This meal was more expensive, around $80, but I got my sushi fix.

The next day my friend rightly sent us over to the Getty Villa in Malibu. Getty, one of the richest men ever to live, built this museum in the 1970s. Modeled on a Roman country house and

filled with ancient Greek, Roman and Etruscan artworks, it had something for all of us. There’s an excellent family room with hands-on-activities for the kids and scavenger hunts for them to complete throughout the museum. There’s even a cafe for snacks at the end. I imagine the villa is even more beautiful in the sunshine. Admission to the Getty Villa is free, but you have to reserve a timed ticket in advance. Parking costs $15 per car. It is definitely worth the trip, which is a short ride from Santa Monica.

Since we also stayed with friends, we took walks on Main Street in Santa Monica and in Abbot Kinney, two very trendy areas in L.A. I’ve been to L.A. a bunch of times so I knew the places I’d like to revisit. We were also taken out for dinner by our friends to Typhoon (while kids stayed with babysitter at home) another oldie but goodie for me from the past. 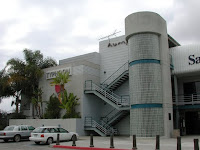 Located at the Santa Monica Airport, this upscale but humble restaurant offers quality Thai food. It does feel very L.A., and I’m sure film deals were being made at other tables, but it’s not pretentious. My friend knows the owner quite well, and they were shmoozing about a possible art exhibit (she’s an art dealer) at the restaurant and a Food Network taping he was hosting this coming week. Since we didn’t have any celebrity spottings on this trip, it made up for it somehow.

On our last day in L.A., we made the drive to Anaheim and went to Disneyland. I took part of Disney’s gracious volunteer program before we left and secured my own free day pass. Adults cost $62 for the day; kids cost $52. Despite the rain, we had a wonderful time. We went on all the rides in FantasyLand while it was raining (Snow White, Peter Pan, etc.) and ventured onto all the roller coasters, race cars, submarine, train rides and more when the sun came out in the afternoon.
We were all a bit drenched but it really worked out for us in terms of lines – there weren’t any! My son had never been to a Disney park, so he was in his element. I’m so glad I was able to show it to him. Best of all, it was an early birthday present for me. My 40th birthday was the next day and it couldn’t get any better than being with them at Disney. I’m a kid at heart.