Memories of traveling while pregnant

Posted by The Culture Mom 3 Comments 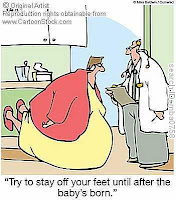 I was just on Lonely Planet’s message boards at http://www.lonelyplanet.com/thorntree/thread.jspa?messageID=16634150&lpafill=twigs. They are featuring women chatting about traveling while pregnant. Boy, did it take me back to the days when that was me. My advice to anyone pregnant and thinking about it is HIT THE ROAD. You will not regret it. Travel will never be the same! Not to burst your bubble, but it won’t.

Before I found out I was pregnant, I was actually in Orlando for a conference. My husband joined me for a few days prior and we ventured to Disney World for the day. I insisted on riding Space Mountain and still remember how jolted I felt when I got off. A day or two later, after he’d gone, I took a hot bath at the hotel before a session. When I got out, I nearly fainted. That was when I knew something was going on…..

About a month later, we had a wedding in London and a trip to Mallorca, Spain planned. I was only 12 weeks or so. I had a lot of heartburn, but other than that, everything was status quo. I remember being really tired, more than usual. During a drive around the dramatic coast of Mallorca, I recall lying in the back of the car in a dead-like state. When we got to London for a friend’s wedding, a good friend took one look at me and asked, “So, are you joining our club?” Translation: “Are you joining the mommy club?” I was shocked at how she knew by taking one look at me, but now as a mom I completely understand. It’s a subliminal thing for moms – we just understand each other.

My next trip was a business trip to Florida for a sales conference at around 25th week. As soon as we landed, my body succumbed to a sinus infection. I was really sick the whole time and left the room only to give presentations. The rest of the time, I was stuck in the hotel room. All of my colleagues were very sympathetic and gracious about my predicament. I did not want to take any medication so getting better took even longer and it was a long week for me.

Around the 34th week, I went on an all-expense paid trip to Israel with Hadassah. My doctor gave me permission and that was all there was to say about it, I was going. My memories of that trip are very, very positive. I took rests when I needed to, but I was able to keep up with the group and experience a trip that was the reward of all rewards.

After I had my daughter, I continued to travel with her in tow. I took her to Atlanta when she was 4 months-old. It was so easy – I breastfed her on the way up and on the way down. I didn’t have to carry any bottles with me. We went to California when she was 11 months old, but she was getting over the stomach flu and gave it to me mid-air. We had to stay in Denver on our lay-over in a hotel until we were able to fly again.

We also went to England and Scotland when she was less than a year-old. She was not a great sleeper at the time. One night, we went out with our friends in Manchester where my dear hubby is from and left her with the in-laws. I’ll never forget during our glorious Indian meal in Rusholme, our cell phone started to ring around 10pm. It was my mother-in-law telling us “to come home now!” Dear daughter would not go to sleep. We patiently told her to keep her up until we got home and ordered another glass of wine each.

During week 24, we all made a memorable journey to Italy for two weeks. She was 1-1/2 years-old, walking and talking a mile a minute. I loved the way all the Italians called her “bella“. We went to Sienna, Assisi, Florence, Umbria, Tuscany’s Chiani region, Lucca…to name a few places. I’d like to believe that the experience made her the avid traveler that she is today.