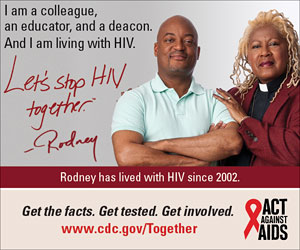 I’m a child of the 1980s, so HIV is not an unfamiliar term for me. It was more widely known as AIDS, but everyone knew about the virus.

I heard story after story of people dying from the disease. Stories of all people, men and women, young and old, black and white. I probably didn’t hear enough, partly because the U.S. President at the time tried to brush the enormity of the situation away. However, what I did hear stayed with me.

Later as a young woman living on my own in New York City, I headed to a clinic in Harlem to get tested, just as I was entering a serious relationship with my now husband. He came, too. I remember the fear and worry we had waiting for the results, because you just never know, but when they came back, they were negative.

Not many people realize how big an issue the HIV virus still is, especially for people over 50 – an age I admittedly am rapidly approaching.  HIV is  a thing of the past, but rather something we should continue to raise awareness about while advocating for those most affected.

As I’ve grown older, I’ve become more educated about HIV and its impact on all of us and the statistics are just as staggering today as they were then.

— More than a million people are living with HIV in the U.S. and that HIV does not discriminate across race, gender, or age.

— While the overall infection rate has decreased in the U.S., there is a significant risk to those 50+ who are less likely to get tested and, as a result, are subject to higher mortality rates than their younger counterparts.

— The stigma associated with HIV is one of the underlying reasons for low testing rates within this age group. Stigma leads to marginalization of those that are positive, decreased testing due to the fear of a positive diagnosis, fear of disclosing status and getting treatment, and fewer conversations about safe sex.

With these daunting stats in mind, I’m happy to share news about the Let’s Stop HIV Together, a campaign that raises awareness about HIV and its impact on the lives of all Americans, and fights stigma by showing that persons with HIV are real people—mothers, fathers, friends, brothers, sisters, sons, daughters, partners, wives, husbands, and co-workers.

The following video is about one woman just like you and me, except for one thing: she contracted HIV. Quite innocently – just like it could happen to all of us. Watch and learn.

After more than 30 years, HIV-related stigma continues to be a barrier that we must overcome to reach the goal of an AIDS-free generation in the United States. We all have a role to play in stopping HIV, and it starts with supporting people living with HIV and talking about HIV with our friends, families, and loved ones.

The important thing is that, once tested, know that positive diagnosis is no longer a death sentence – people can live healthy fulfilling lives with the proper treatment.We must re-double our efforts to assure that all people know about HIV, how to prevent transmission, their HIV status, and that people with HIV are linked to care, and treatment and prevention services. We can stop HIV Together—by getting the facts, getting tested and getting involved.

Every voice and every story is important. Individuals featured in Let’s Stop HIV Together have shared their stories to raise awareness, fight stigma about HIV, encourage HIV prevention and testing, and champion the power of relationships in the personal and public fight to stop HIV.

The campaign tells people to get tested. Testing is the only way to know if you are HIV positive but many people avoid testing because of stigma. Knowing your status may empower you to talk openly about what it’s like to get tested and encourage others to do the same. For more information about testing and to find a testing site near you. After you do, tell everyone and get them to do the same.

You can help reduce stigma and increase awareness and knowledge about HIV by sharing your own messages of hope and encouragement, so write about it. Talk about it. Share your story. Engage on social media and make some noise. Get others to join you. Host an event in your community to educate people about HIV.

After all, your voice is the one that matters most. Make it heard.

Disclosure: This post is made possible by support from the Let’s Stop HIV Together campaign. All opinions are my own.