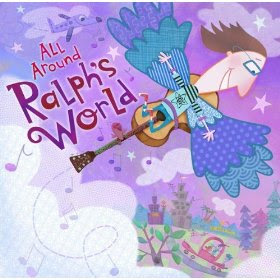 You gotta love it when NYC comes to your doorstep.  I know I do. Going into NYC is a treat, but it’s also great when you have wonderful options in your hometown.  On Saturday, May 1st at 3pm, I and the rest of Westchester will have such an option when children’s music phenomenon Ralph’s World will be performing songs from and signing copies of his latest record All Around Ralph’s World at the Borders Bookstore in Scarsdale, New York (680 White Plains Road, Scarsdale, NY Tel: 914-725-4637).

With seven full-length albums (including the Grammy-nominated Green Gorilla, Monster & Me), a CD/DVD anthology, an award-winning DVD and four books geared towards children already under his belt, Ralph Covert is a force to be reckoned with in family entertainment. Ralphâ€™s Worldâ€™s new album, All Around Ralph’s World, features 16 songs dealing with all sorts of travel â€“ from around the block all the way to outer space.

Over the past few years, there has been an explosion in musical offerings for children, but for nearly a decade, Ralph Covert and Ralphâ€™s World has been at the forefront of the movement. The New York Times concluded, â€œIt is possible that Mr. Covert will turn out to be (the) genreâ€™s Elvis Presley, or at the very least its Elvis Costello.â€ Covert and Ralphâ€™s World have been featured in such high-profile outlets as Time, Newsweek, NPRâ€™s â€œAll Things Consideredâ€, â€œABC World News Tonightâ€, â€œThe CBS Early Showâ€ and many more.

The Chicago-based Ralph Covert originally came to the publicâ€™s attention with his first band, longtime Midwest favorites The Bad Examples. Their debut album, Bad is Beatiful, was named one of the â€œ50 essential American power-pop albums of all-timeâ€ by Goldmine. The multi-talented Covert is also an award-winning theatre playwright, with pieces for both adults and children.

The May concert will feature Covert in an acoustic performance.  It’s a free show, too.

Here is an MP3 you can download to sample his music.
For more information, please visit: RalphsWorld.com or visit the fan page on Facebook.