Posted by The Culture Mom 7 Comments

The Grammy-nominated Baltimore rock band for kids, Milkshake, is coming to NYC to celebrate its 2009 album, Great Day and the Culture Mom Blog is giving away FOUR tickets to this fabulous event!  Milkshake will rock out in a surprise-filled performance for families on Saturday, April 17th, at 10 a.m. as part of the House of Kids series at The Fillmore at Irving Plaza. 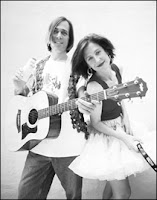 Milkshake was founded by Lisa Matthews and Mikel Gehl, both members of the rock group Love Riot. After becoming new parents, they found themselves thinking up songs to entertain their toddlers, and consequently recorded an album of these songs in 2002. Since then, their band has grown to 6 members, and they have become familiar to millions of American households through the band’s colorful, energetic music videos, seen on Nick Jr., PBS Kids and Discovery Kids.

In addition to the Grammy-nominated album, Great Day, Milkshake has released three critically acclaimed, multi-award-winning CDs â€“ Happy Songs, Bottle of Sunshine, and PLAY! â€“ as well as a Parentsâ€™ Choice Silver Award-winning DVD, Screen Play!, a joyous mix of MTV-like videos, animation, in-concert videos and cool bonus features, including interviews with the band and a pair of videos featured on PBS Kids. The band even found inspiration and time to create their own comic book, featuring Milkshake as superheroes.

The House of Kids series is aimed at bringing parents and kids together through the shared appreciation of live music. In addition to Milkshake, the April 17th show will feature performers from the Big Apple Circus, storytellers, child performers, and more.  This is a show not to be missed!

Check out Milkshake’s music and videos on their web site.

The show is taking place on Saturday, April 17th at 10am. Tickets are $20 each, kids under age two gets in free. Tickets can be purchased at http://www.livenation.com and are also available at the Fillmore at the Irving Plaza Box Office in New York City.

To celebrate Milkshake’s new album, the Culture Mom Blog is giving away a family pack, or FOUR passes, to the show at the Fillmore on April 17th.

*Tell us who you will take to the show in the comment section below and become a member of this blog.

*Tweet about the giveaway (remember to include @culturemomblog in your post so I see it!) and become a member of this blog.

***FOR ADDITIONAL ENTRIES, DO ANY COMBINATION OF THE ABOVE.***

Winners will be chosen on Thursday, April 8th, at 11:59pm so you have ample time to make your plans to go to the show if you win!

Disclosure: These tickets were provided to me, free of charge, with no requirement or agreement of review requested in turn.