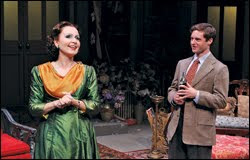 According to Playbill, Cornell was one of the first theater greats, up in the ranks with Helen Hayes, the Lunts and Ethel Merman from the early 1920s through the mid 1950s.Â Â  Together with her husband, she established her own producing organization, taking her productions of Shaw, Shakespeare and newer works all over the U.S.Â  Despite countless offers from Hollywood, she never really ventured into TV and film.Â  She had the odd appearance, like in the film “Stage Canteen (watch this interesting video I found on You Tube).

In the play, she is portrayed by Kate Burton, just after a performance of Shakespeare’s Cleopatra.Â  Gurney’s character, Pete, a fellow Buffalo native, comes knocking on the door her of the Martin Beck Theater after the show for her autograph.Â Â  He’s shy – his grandmother back home had written a letter of introduction for him – so he could meet her and tell his acting class about the meeting.Â  She comes out, still dressed in her theater garb, talks for a few moments, and signs his program.Â  It’s a quick meeting.

Pete’s character then turns to the audience and informs us that after the meeting, he dreamed about writing a play about the meeting one day.Â  The play launches into a fictionalized account of what might have happened had Pete not left.Â  He learns more about Katherine, as well as the other two charactersÂ  – Gert played expertly by Brenda Wehle and Guthrie played by the sensational Boyd Gaines (you may remember him from “One Day at a Time” but you may not know that he is the quintessential stage actor).Â  In the dream sequence, the characters are all open about their sexuality (Katherine and Gert are lovers; Guthrie comes onto Pete, explaining that his marriage with Katherine is staged).Â  Katherine tells Pete that “the most important loves are the loves we don’t talk about” as she stares at Gert with longing eyes.

The play is also a tale of an aging actress who doesn’t feel good enough.Â  Katherine has had enough of acting.Â  She despises playing Cleopatra and longs for a life outside the theater.Â  Guthrie is trying to talk her into going onto television.Â  He’s her manager and director and is looking for the next big thing.Â  He tells her that “Television will give the common man the best seat in the house!”Â  But she doesn’t care.Â  She’s tired of acting and doesn’t understand the new world of Marlon Brando and Jackie Robinson.

The play is short, only 90 minutes.Â  It’s a wonderful look at the life of an theater actor.Â  All four actors are superb, even the understudy who took the place of Pete for the first time last night (Stephen James Anthony).Â  In usual Lincoln Center style, the set (by John Arnone) and costumes (by Ann Hould-Ward) accentuate the play’s theme.Â  It was a real treat to see Boyd Gaines again, who I last saw in another Lincoln Center production, “Contact.”Â  His expressions are priceless.

The play is primarily about Katherine Cornell, the greatest actress of her time, behaving in “the grand manner” employed in the theater of that era, both on stage and off, played by the wonderful Kate Burton.Â  Her first appearance on stage is hilarious – as she enters the room confidently in her Cleopatra costume to meet her fellow Buffalonian.Â  She pays real homage to this legendary actress and the old days of Broadway.

The Grand Manner is playingÂ  through August 29th at the Mitzi E. Newhouse Theater on 150 West 65th Street between Broadway and Amsterdam.Â  To buy tickets, go here.