Culture Mom Night Out: The Story of Helen Keller comes to Broadway in The Miracle Worker 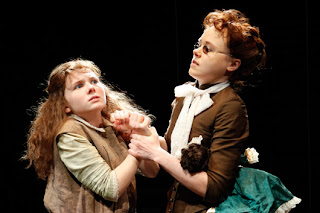 As a child, the story of Helen Keller, who was both blind and death in the 1880s, inspired me to no end.  Born with either scarlet fever or meningitis, she could not communicate with anyone, not even her parents.  Her teacher, Annie Sullivan was equally inspiring for changing her life.  My mom introduced me to the story when I, myself, was a young girl and it resonated with me on so many levels.  She was proof that anyone can rise above their difficult circumstances.

Annie Sullivan was Helen’s staunch supporter who taught her to read and write.  Helen became the first person both blind and deaf to graduate from an American college.  She became an author and suffragette, among other things.  She wrote books and traveled the world as a lecturer and ambassador of the American Foundation for the Blind, drawing attention to the need to improve the lives of people with visual impairments.  She also helped found the American Civil Liberties Union.  She was an amazing woman, a role model for all of us.

This amazing story of her transformation as a child is being retold on Broadway in The Miracle Worker, starring Academy Award nominee Abigail Breslin as Helen and Tony Award nominee Alison Pill as Annie at the Circle in the Square Theater in New York City, which happens to be one of my favorite theaters.  Every seat is a good seat and their productions are impeccable.

The play first focuses on the early struggle that the parents, played by Jennifer Morrison and Matthew Modine, had with Helen, who was impossible to deal with as a child, and what they should do with her.  Her brother, played by Tobias Segal, thinks she should be sent away.  It is their Aunt Ev, played by Elizabeth Franz, who tells them to find some help and keep her close at hand to avoid institutionalizing her.  The power of their love and patience is definitely a major component that kept Helen going.

The play’s focus is mainly on the relationship between Helen and Anne, who was determined that language will set the girl free. At the end of the play, when Helen at the water pump vocalizes the syllables, wah-wah (for water), I was brought me to tears.

The performances are all very solid.  Abigail Breslinâ€™s performance of Helen is very real, and I am so impressed by her ability to become Helen Keller.  She is barely recognizable and is able to capture all the mannerisms and body language of Helen Keller, including the rubbing of her face which I remember vividly from the original film.

Alison Pill, who I loved in HBO’s show “In Treatment” and who I remember very well from the film, “Milk,” is clearly a stage talent. She was nominated for a Tony Award for her role in Martin McDonagh’s The Lieutenant of Inishmore.  She reminded me of Patty Duke, who played Annie in the original film.  She play a very determined teacher who had to break through so many barriers to help this young, challenged girl.  She has to continuously argue with Helen’s parents for more time and refuses to give up her battle to bring Helen to a better place.  Pill plays her with such grace and dignity and is so powerful and convincing as Sullivan.  I look forward to seeing Pill in more theater down the road.

My daughter is nearly 7, and I felt she was too young for this show.  I’d recommend it for a child 8 or 9 years-old  and up.  There were a lot of kids in the audience with their parents.  If your child has studied Helen Keller in school, the play will be quite meaningful for them.  If your kids are too young, leave them at home like I did and go have a nice night out and experience a part of our history on stage.