Stand Up for Israel/Comedy for Koby 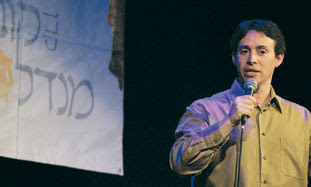 I spent my freshman year of university in Jerusalem with a guy named Avi Liberman (pictured above).  I always remembered him as a genuinely nice, funny guy and was happy when we reconnected on Facebook a few years ago.  The program we went on either convinced you to move to Israel or turned you in a real Zionist, doing what you can for Israel from wherever you are.

For the last few years, I’ve been keeping up with Avi’s life as a comedian, whilst he’s been living in Los Angeles.  I knew that he has great success in his field.  However, I didn’t really know how he has taken his Zionism to awesome heights…until my recent trip to Israel when I was able to experience it myself.
Avi is the guy behind this incredibly unique tour called “Stand Up for Israel/Comedy for Koby” that he brings to Israel twice a year in Jerusalem, Tel Aviv, Raanana, Beit Shemesh Haifa, Modiin and, for the first time this year, Gush Etzion.  When I realized the show was coming to Raanana, where we were staying, I rushed my kids to my sister-in-law’s house for the evening and ran to the theater with an American friend to nab a ticket from the already sold-out show.  I was desperate to see what the show was all about.  Every American friend I mentioned it to while in Israel was aware of the show.  Word is out.   This is obviously a show with meaning and a purpose.
It all started on May 8th, 2001, when Arab terrorists murdered Koby Mandell, a 13-year-old boy and his friend, Yosef Ish Ran, near their home in Israel.  Their parents set up the Koby Mandell Foundation to aid victims of terror.  The money they raise provides individuals and families with the tools to translate the pain and suffering of tragedy into personal growth, deeper interpersonal relationships and active community leadership.  The money helps send victims of terror to summer camp and other events that they might otherwise miss out on. Proceeds from Comedy for Koby’s ticket sales support the Koby Mandell Foundation working on behalf of these families.

Avi came up with the idea seven years ago while visiting Israel during the height of the Intifada.  Since then, he has seen the shows develop into something that Israelis rush out to buy tickets for as soon as  they go on sale.  He brings different comedians from North America’s comedy scene every year, twice a year.  His goal is to make people laugh and forget the news going on around them.  This was certainly what Israelis needed during my visit, after the flotilla incident caused such a negative international reaction.

This time Avi invited renowned and established comedians Wayne Cotter, Johnny Sanchez and Bob Zany to join him on stage to crack jokes about Americans living in Israel, their visit to the country (the first-time for all of them), their lives back in the U.S. and other news-worthy topics.  They were all hilarious and much of the audience was in tears during the performance.  The audience mainly consisted of Americans and other Anglos who have migrated to Israel.  Quite often, the comedians turned to the audience for participation and there was an open Q&A; at the end of the show.

Avi opened up the show saying they had added another performance on a cruise ship to Turkey (which got a lot of laughs) and included a list of the top ten things you won’t hear in Mea Shearim  (“I forgot my gym clothes!”); Zany, a regular on Leno, said his next stop would be the Tel Aviv Kentucky Fried Chicken; Sanchez, the first Latino to ever join the tour, talked about his impressions of the country and included an accurate statement about how the country’s beauty is never included in media images of what’s happening; and Cotter talked his own experience of visiting Israel for the first time and having a child late in life, amongst many other topics which cracked the audience up.

They were all so funny, just what the doctor ordered for this group of English speakers living in Israel.  Sometimes, you just gotta laugh, and Avi’s team delivered the laughs.

Seeing the show made me so proud to know Avi.  It also gave me an opportunity to get away from the kids for a night!  As much as I love them, being away for 3 weeks with not one night out did make me crave some time alone, and I got it that night.  I got my dose of culture, while contributing to a cause I care so much about.